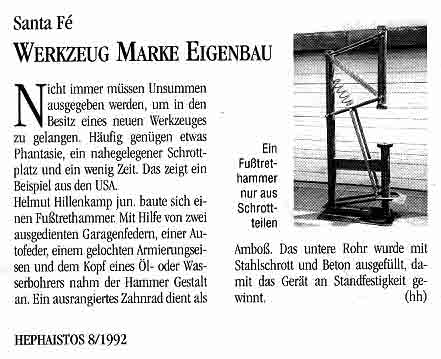 Treadle hammers have always fascinated me as an "American thing." They help the singlehanded smith to do the work for which he otherwise would need a helper. Since individualism is one of the main collectiwe character traits in this country, the treadle hammer had to be invented and cultivated. In Europe and on the other continents, smiths just have their apprentices or workers around to be a striker. In Europe today, people buy their tools ready made, whereas here, smiths like to experiment, invent their own, modify and personalize. So the treadle hammer becomes an object for creative designing. Look at someone's treadle hammer, and it will tell you a lot about his or her personality. In theory, there could be as many different types of treadle hammers as there are people working in hot iron.

For instance, it had never really bern clear to me why one would use leaf springs to guide the hammer head. Since they are hinged, they never get any real bend to them. However, the hinged points are weak spots in a lot of the models, and the "wimpy little bolts" break off. Here was an opportunity to use some forging technology: 1" rebar was punched and drifted, so it would aIlow a 1" round bar to come through and act as a hinge bolt. A piece of forged iron is really useful in this place - how often do you find that in modern equipment?

The hammer head is an old drill bit from a well drill, set into a pipe. All materials are recycled scrap, by the way, which partly determines the way the design goes. The stuff is there, so let's build a hammer with it. As a basis I used the ABANA plans, for overall dimensions. All connections are welded; the only bolts on the thing are the ones that hold together the safety cable, which is passing through the inside of the two garage springs. Just in case one of the springs breaks, the cable would prevent it from flying around and whacking my face. The car spring makes the head bounce back in the middle of its upward motion. That ensures faster blows. Since I had extended the swinging arms out further than the ABANA plans suggest - to get less curvilinear and more parallel striking - at first the rhythm of the hammer's blows were really slow. With the car spring added, the hammer sped up again. The anvil plate is an old gear. I filled the pipe underneath it with scrap and concrete, but couldn't tell any difference from before. There is no lead filling in the hammer head. It is heavy enough without it. 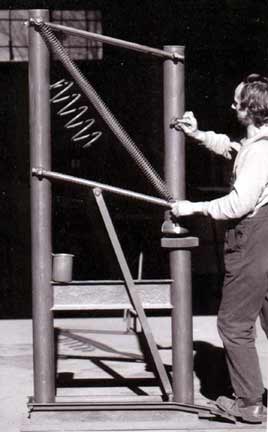 Helmut Hillenkamp was raised in Germany. With a degree as a journeyman welder, he has traveIled extensively and has studied blacksmithing in a variety af countries. He now works out of his studio in Santa Fe, New Mexico. Helmut is foreign correspondent for HEPHAISTOS, the German blacksmithing magazine.